Pomeranian Club of Central Virginia B2B Specialties *50/50 Raffle* Winner will be drawn on 10/3!

Amazon App on your Phone 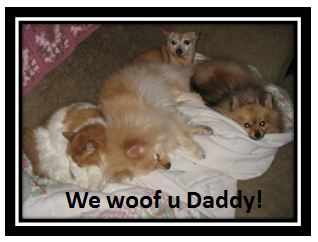 I would like to wish my amazing husband Jerry a Happy, Wonderful Father’s Day on behalf of our kids, Flapjack, Cupid, Romeo and Biscuit!  Yes our kids all have fur, but their daddy goes out of his way for them all the time.

The following is an excerpt from the draft of the ‘book’ I’m working on that I felt was appropriate for this day even though I have not finished writing my book yet.

After the months of uncertainty, it was finally determined that my liver was failing and I had just been diagnosed with Advanced Hodgkin’s Lymphoma.  My best chance to halt the liver failure prior to reaching a transplant level and to give me the highest possible chances of beating the Hodgkin’s into remission was to start chemotherapy as soon as posssible.

The one stumbling block was family medical history.  Of the 4 drugs I needed to take, one was toxic to heart muscle and while my MUGA showed my heart looked good, knowing my father had a history of heart problems so my Doctor wanted to know what he had in order to determine how much medication to give me and if I could take it at all.

At this point I had to Google my father because I had no contact information for him.  Once locating his phone number, I proceeded to leave messages for him, even going as far as to say if he didn’t want to talk to me, the least he could do was call my Dr and answer his questions.  I left all my contact info, my Doctors contact info and email addresses on his answering machine.

Almost 2 weeks later, he finally decided to call me back.  After spending an hour on the phone with him and me crying, the last thing he said to me was that he had to talk to his wife to see if it was okay if he talked to me in the future.  I never heard from him again…

With everything I was going through I was just happy to start treatment.  It wasn’t until after my treatment was finished and the odds looked good that I was going to be okay, that it dawned on me:

My father took almost 2 weeks to decide if his first born childs life was worth a phone call!

That was when I finally gave up on my father as my younger brother had done so many years ago.  I don’t know why it took me so long, maybe because I remebered more being older, I just always had hoped that things would change.  Maybe if he had sent one Get Well Soon card or even inquired once as to how my treatment was going, things would be different.

Instead of admitting he had done some things wrong and trying to start over, he used his wife as an excuse for his actions and showed how much he really “cared”.”